The Stanford Cardinal defeated the Wisconsin Badgers in Pasadena on New Year’s Day,  in a tough, grinding battle to claim the 2013 Rose Bowl trophy.  I was ready to fill in for Stanford quarterback Kevin Hogan if Coach David Shaw needed my services.  My 100 year-old throwing arm is still pretty respectable, all things considered.  Please keep me in mind, Coach. 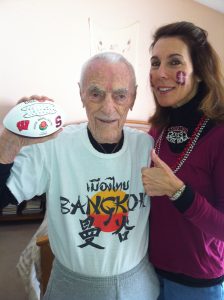 My contest winner, Roland Hemming, spoke with me last night after the game, letting me know how the day at The Rose Bowl went for him and his 11 year-old son, Nickolas.

“It was a nail-biter,” said Roland.  “It was exciting, and the first college football game my son ever attended.  He was amazed by the passion each team’s fans brought into the stadium.  So many people, so much energy.  Unlike anything he’s ever seen before.”

That also included the Stanford band, described as “different” by both father and son.  (I’ll allow Lisa the honor of handling this issue, which doesn’t seem to faze her.)

I am so pleased Roland and Nickolas made good use of my tickets.  They deserved the experience, and I’m grateful neither was disappointed.  Roland and I plan to meet in person later this year.  Both of us would like to get to know each other a little better.  Roland says I remind him of his grandfather, to whom he was close.  Hopefully,  I will turn 101 on July 4th.  That will be a fitting time to have Roland over for a visit and enjoy some birthday cake with me.

I enjoyed watching the game at home, where I could get an up-close view watching on a widescreen TV.  Lisa and Bob joined the Stanford faithful at the game.  Lisa headed out the door with Bob, covered with S tatoos and bling (both new to me.)  I hardly recognized her.  She explained something to me about this effect Cardinal football has had on her since her freshman year.  Once her upperclassmen friends taught her how the game is played, she was hooked.  Sometimes a little knowledge sets a person off in a direction you’d never expect them to go.  Lisa has three sisters.  All her sisters shop.  Lisa follows football.  They joke she was a stray left on their parents’ doorstep. 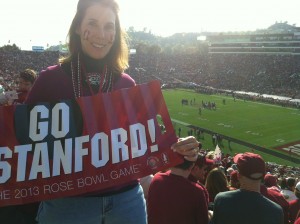 She won’t have her voice for a couple of days after screaming for the Cardinal, but I’m confident she’ll recover and go on to cheer loudly once again.  She’ll need a few days for her adrenaline to settle down as well, after witnessing the game’s only interception by standout defensive player Usua Amanam.  Bob does a better job at taking these games in stride compared to Lisa ( a good thing.)  I need one sane person around me during football season.  Someone’s got to make sure my medications are dispensed correctly.

To wrap up, congratulations to the Stanford team and to Roland Hemming.  Events of this past week have been wonderfully uplifting.  Thanks to all of you who have taken an interest in this story and written to me.   I’ve got to email my centenarian DNA study (Genomics XPrize 100 Over 100) pen pal, Dennis, who is 106, with this week’s news.    It will take 10 years off of his life.  Given that 96 is the new 76, he’ll love it!

In case you missed the original article by Guy McCarthy of the online news service Patch that kicked off this wonderful story, see:

Thank you all again for your interest in an old wrinkled man and his antics.  If I’m lucky enough to be around in another year, I’m planning to hold a similar contest.  I’ll see what BCS bowl game Stanford will appear in, and take it from there!  (Bob and Lisa are ready!)

Happy 2013 everyone.  May you enjoy good health, happiness and success.  And remember to be kind to one another, just like Roland Hemming.