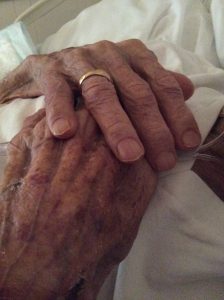 Since turning 100 on July 4, 2012, Henry has been after me to write about his life before knowing me and after. I always put him off. “Henry, I’m too busy. I don’t have time to write.” I’m not too busy any longer.

During our visit today, I asked Henry for permission to write about him, his life as a child, married with Sylvia, and with me, his friend. He shook his head “yes” and whispered “to help other people.”

On Valentine’s Day Eve, with a heart bursting with battling emotions, I feel compelled to write about anger I have now. Seething, heartache anger, not because Henry is dying, but because he didn’t have to die this way.

Last year it became apparent Henry needed more help living with us. Legally blind due to wet macular degeneration and hard of hearing despite new hearing aids, his steps had developed into a shuffle as he moved throughout our house. Wanting to keep him as independent as possible, but safe, I knew it was time for him to have assistance in our home. The problem was we couldn’t afford it.

Henry wasn’t sick, only old. I reached out to several wealthy people who I know from professional engagements and extended family (mine and Henry’s.) My request: A loan — not a gift — to cover the cost of a caregiver in our home to keep Henry safe. How to pay back the borrowed funds? With the proceeds of an insurance settlement (to follow this year) as the result of an  accident resulting in Henry suffering injuries.

Henry was happy. I wanted to keep him with us, and naively thought the people I reached out to (people so wealthy they’d never miss the money even if it were gifted) would agree to help. Collectively, each of them could pitch in and let Henry die at home surrounded by love and our dog, Rosa, who adored him because he always had a treat for her.

Every single person I approached refused. “Henry’s got to die sometime.” “It’s not your responsibility. You’re not his family.” “I’ll check with my attorney and get back to you.” I never heard back.

Reluctantly I began to search for a safe, clean place for Henry. The process literally depressed me and took away my usual ability to function like the over-achiever I am. I saw pathetic excuses for homes ranging from Medicare coverage to $5,000.00 a month. I lost 12 pounds I didn’t need to lose. I couldn’t safely care for Henry at home any longer. Others’ ability to lend– forget outright give — was no where.

I finally settled upon an assisted living facility only eight miles from our home. The room bore the number “314.” My birthday is March 14th. I took it, maybe foolishly, as a sign. I brought Henry there to tour the facility. He seemed indifferent. “I want you to be safe, Henry.” There was no reply.

On November 5, 2016, my husband, Bob, and I moved Henry into his new home. My husband, who I initially feared would resent Henry living with us, turned into his sports page reader every morning and his baseball game companion.

For the next 80 or so days, I visited Henry save but a few days I was out of town. He never assimilated into the routine of assisted living. His enormous appetite shrank. I ached, unable to concentrate on anything. Henry was declining before me, and only because I was unable to convince a group of multimillionaires granting me a loan (paying interest) to keep Henry at home with a caregiver was a sensible way for him to live out his remaining time with us.

Henry began experiencing severe anxiety. He stopped walking, used a walker for a few days, then felt it necessary to be in a wheelchair. I believe all this to be an emotional reaction and not a physical one. He was homesick. He told the assisted living facility staff he wanted me to bring him home. I cried and became more depressed. I couldn’t work effectively. None of this had to be, yet those with the means to allow Henry to come home would not budge.

On January 24, 2017, Henry was terrified to go to sleep because he told me he was afraid he wouldn’t wake up. I stayed with him until late in the night, neglecting my own marriage, telling him his fears weren’t reasonable. Two weeks prior I spoke with his physician about placing him on Hospice care for palliative measures. Henry wasn’t sick, but he needed to be kept comfortable. Small doses of morphine and Ativan allowed him to fall asleep. That night, after he was asleep, I drove home hungry for dinner at 11 pm.

Early the next morning my telephone rang. A staff member from the assisted living center sounded frantic. “Henry’s out of control and you need to come here right away!”

I drove to the facility, wondering how Henry, a gentle man, could be out of control. When I arrived, I didn’t know who I saw. He looked frantic, threatening to break windows and to strangle himself with oxygen tubing. He wouldn’t answer to his name.

“I’m Mr. Wilson. Lisa, don’t you come near me. Things here aren’t what they seem.” And then, in the hallway outside his room, he cried, “Help! Help!”

Henry was experiencing a physic break. His terror of dying and anxiety caused by homesickness turned him into someone else. Someone else who didn’t have to acknowledge the real Henry was so unhappy in room 314 and so petrified he would die there alone that by becoming someone else, all of that pain and anguish would be buried.

Henry’s condition necessitated his transfer to a top-notch skilled nursing facility, one of the rare ones, affiliated with the hospice agency caring for him. The same hospice agency I volunteered for when I became Sylvia’s volunteer.

Henry’s stay lasted eight days. During this time I was afraid to see him and stayed away, but checked on him by telephone. He required more medication to calm him, had to be cajoled to eat, lost even more weight, and traveled closer to the point of literally starving to death.

On February 1, 2017, he was transferred to a beautiful little hospice home in my hometown where I had previously volunteered as well. I met the medical transport team at the hospice home. Carried on a stretcher, and looking like someone else since last November 5th, I broke down and sobbed hysterically. Not wanting Henry to see my tears and state of upset, I didn’t approach him until I could pull myself together.

Thirteen days later, Henry is alive only because he wills it. I am furious because Henry didn’t have to be here if it weren’t for those who refused to help him stay at our home with a caregiver. I don’t believe in prolonging life, but I do believe in a person having a natural death that isn’t premature.

If I don’t channel this rage into something constructive I won’t do myself or this world, long on obsession with youth and concentration of wealth but so inadequately short on compassion and giving, any favors.

I watch Henry fight death, and wish I were wealthy. Not to indulge myself, but to spare just a few like Henry from callous indifference.