Lisa’s Turn: Even This Healthcare Advocate Could Use Her Own

Henry’s still resting up after all of his 101st birthday festivities, so I guess it’s me at the keyboard tonight while Henry continues to rest and recuperate.

This month I found myself in the “patient’s seat” rather than in the one where I’m advocating for another patient.  It was an enlightening, not to mention scary experience because it demonstrated to me how valuable healthcare advocacy is for everyone (and that includes me.)

I work in a hospital setting quite often.  Because of this, I’m required to have an annual tuberculin (tuberculosis)  skin test.  In past years, my skin has always developed a small red rash in the area of my inner forearm where I’ve been injected with TB proteins (antigens.)  My reaction has always been diagnosed as negative.  I never developed an induration (hardening or swelling of the skin, or a palpable or raised area) which is the most common indication of a positive result for TB.  See the picture below for an example of what a positive TB skin test looks like: 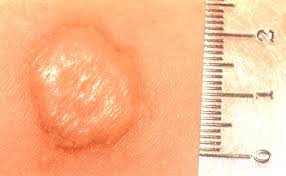 Some people who have been exposed to and acquired a TB infection will not present with any symptoms (such as coughing, fatigue, or coughing up blood.)  In this case, a diagnosis of latent TB is made.  Even though the infection is latent, treatment is recommended as one out of ten persons diagnosed with latent TB can expect to develop active TB in the future.  A course of oral medications, taken between three and nine months, is what is commonly needed to kill the latent infection.

Imagine my surprise when I appeared 48 hours after my injection to have my skin test interpreted by a registered nurse, and told my reaction was positive.

“Why?” I asked.  “I don’t have any swelling or a firm bump.  My skin is soft and flat.  This is the typical response my body has always had to the TB skin test.”

“I think it’s positive,” she replied.  “Let me get another nurse to see what she thinks.”

Another registered nurse came into the examination room and looked at my inner forearm, as shown in this picture (taken at home a couple of hours after my appointment) —

“It’s positive,” she said.  “Do you have any coughing, any fatigue, are you spitting up any blood?”

“No,” I replied.  I feel healthy and am active.  I repeated, “I always get a red rash as a reaction, but it’s never swollen or raised.”

The two RNs began to instruct me about a nine-month medication regime I’d be required to complete.  “This will kill the latent TB infection you’re carrying,” they each told me.

I was so angry.  I wasn’t 100% certain I wasn’t infected, but I felt the odds were more like 99%.  It is true that I’m exposed to the TB virus by patients occasionally, but in those circumstances I always follow hospital precautions.  I clean my hands, don a gown, gloves, and mask before entering a room with a patient diagnosed with TB.  Upon leaving the room, just before I exit the door, I remove my gown, gloves, and mask, and clean my hands again.

One of the nurses went on to explain since I wasn’t coughing, a chest X-ray wouldn’t be necessary, but a blood test would be needed to confirm both nurses’ positive findings.  The test, called the Quantiferon TB Gold test, would confirm (or refute) their findings. The results would be available in 3-4 days.

I paid a visit to the lab, had three small vials of blood drawn, and began the wait of a few days that seemed liked a few months.  I knew in my mind I was 99% negative.  My intuition told me the same.  Yet I had two registered nurses who told me I was mistaken.  As furious as I felt, I also felt fear.  I had comforted HIV-infected patients who I knew were active with antibiotic-resistant tuberculosis.  I felt pretty certain I had followed all of the mandatory safety precautions, but there’s always that chance I slipped up somewhere.

The wait wasn’t pleasant.  I had to constantly calm my fear with what I knew to be fact: I always developed a small, flat, red rash in reaction to the TB skin test.  I’d always been cleared as having a negative reaction.  My latest test left me with soft skin, no hardening or raised bump.

“You’re a professional healthcare advocate,” I kept reminding myself. “If you had a client in the same position, you’d tell that person there was a 99% chance their reaction was negative.  It would be proven by the Quantiferon TB Gold test.”

Telling yourself and telling someone else are two different things.  Just as I would expect a client in my position to be fearful in spite of the odds in their favor, I felt that fear.  I also felt anger, because I thought a better response from the two RNs examining me could have sounded something like this:

“We’re really not certain what this red rash means, even though you say you’ve always experienced it after getting the TB skin test injection.  We want to be sure of our findings, so we recommend we run a blood test to confirm our visual interpretation.  The test results will be available in a few days.”

That conversation never happened.  I returned a few days later for my blood test result.  It was negative.  I asked for a copy of the report for my own master medical file.  Then I told the RN present, who was one of the nurses who interpreted my result as positive, what I thought would have been a better way to handle my situation.  My comments were met with little effect, and no apology.

I left the office, relieved but still angry.  How many times have patients’ comments fallen on deaf ears?  Why is it so difficult for someone to admit a mistake?  Has offering an apology become passé?

I could have used my own healthcare advocate in this situation, but I was the best I could muster.  I think I’ll start shopping around for one.