I’m 100 years old.  Really.  When I was born in Boston in 1912, there was no internet.  No computers, no email, no blogs.  This is all new to me, but since turning 100 on the 4th of July this summer, I felt if I didn’t try something new and exciting (and mystifying) I’d shrivel up and become obsolete.   I recently had five fantastic birthday parties, and Lisa tells me the best way to get the word out is to blog about it. 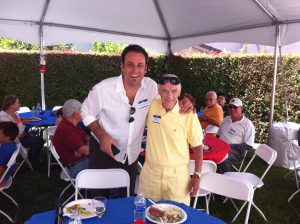 “What’s a blog,” I ask her.  She tells me it’s similar to an electronic version of being a newspaper columnist.  And with everything I’ve been through in my life, what the heck.  The worst scenario is I fail miserably, and there are worse things than that.  Try the Great Depression, having a stroke, and losing your jewel of a wife of 70 years to Alzheimer’s.  The best scenario is I can reach countless people struggling with aging and actually provide them with some support.

It’s hard to believe I’m a centenarian.  A century old.  Incredible.  I’ve been through life’s highs and lows.  I’m still here, so I figure the Great Architect has something else in store for me.  I’m a regular person like you, trying to deal the hand I’ve been dealt.  I’m sure all of you are, too.  By sharing my life’s journey with you, I hope I can inspire, support, educate, and hopefully entertain you.  I have no reality TV show to pitch, no sex tape to hide, no tweets to send.  My idea of twitter is the wonderful feeling I had in my body the first day I met my wife, Sylvia.   I proposed to her two days later.  The wedding was six weeks after that.  The only regret I have is I didn’t propose on our first date.  Our 70 years together was beyond description.  Not a day goes by when I don’t think of her.

Sylvia and I met Lisa in March 2009 when she served as a patient volunteer for TLC Hospice in Moorpark, California.  From the moment the three of us met, we felt joined together like we had all known each other for decades.   Sylvia had Alzheimer’s and was 89.  I, at 96, was doing my best to take care of her in our home in Westlake Village, California.  It was a struggle because I have wet macular degeneration and am legally blind.  Sylvia’s hospice nurse, Jeannette Frye, her social worker, Amy Yoffe, plus Chaplain Adam Rodinsky supported me and Sylvia along with Lisa, but each day the strain grew.  Finally, I had to place Sylvia in a board and care facility, which broke my heart.  Alzheimer’s ran its course and took Sylvia’s life early in the morning hours on January 4, 2012, which happened to be her 92nd birthday.  Lisa and I were by her side at a beautiful skilled nursing facility, Moorpark Health Care Center (Moorpark, California) when she died.  I had suffered a moderate stroke just six weeks before.  It was a difficult time.  My peripheral vision was gone, my gait unsteady, my heart shattered.  The support I had is what gave me the strength to move forward until I regained my own strength and resolve. 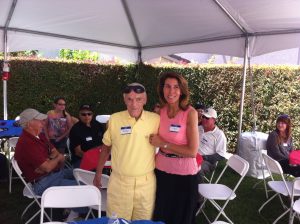 Lisa and her husband, Bob, opened their home to me after my stroke and disasterous experiences in both a hospital and their rehabilitation facility.  I stayed at the facility just one day before Lisa came to rescue me from the point of no return.  Now the three of us are a family and I am not alone facing the world as a centenarian and a widower.  There’s something I want to do in Sylvia’s honor and memory before the Great Architect calls me home.  That’s my purpose for living now.  That and eating the best donuts and chocolate I can get my hands on.  (More about those two things coming.) 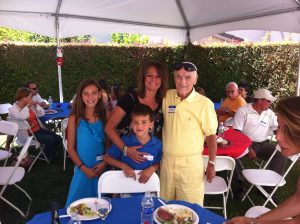 Party #2 — Newbury Park, California.  July 4, 2012.  Hosted by Lisa and Bob.  A quiet day at home spent in amazement at the miracle of turning 100.  Hebrew National hot dogs, baked beans, potato salad and flourless chocolate cake.  We were joined by our neighbor, Barbara.  A day to reflect and be grateful.

Party #3 –Westlake Village, California.  July 6, 2012.  My skilled and compassionate internist, Dr. Linda M. Gerrits, and her staff closed their office early.  A luncheon and cake were served, pictures taken, and a great time had by all.  Dr. Gerrits has a wonderfully caring bedside manner not found in most doctors today.  I credit her, in large part, for my longevity.

Party #4 — Newbury Park, California.  Hosted by Bob and Lisa on July 8, 2012.  Big outdoor tents, balloons, flowers, tables, chairs, food galore.  Horseshoes and cowbells as centerpieces.  (I love all things Western.)  Guests exceeded 50 people.  Guests ranged from Sylvia’s hospice team, new neighbors, new friends, as well as Linda M. Gerrits, M.D. (who never rushes a patient, yet always seems to run on time) and Daphne Panagotacos, M.D., my exceptional dermatologist based in Westlake Village, California.  I was on my feet all day, adrenaline pumping.  When the party was over, I headed for bed and slept all night through, a rarity.  As I’m sure older people understand, sleep doesn’t come as easily as it did when I we younger.

Party #5 — Carson City/Virginia City, Nevada,  July 15, 2012.  Aboard the V&T Railroad, a steam engine brought us from Carson City to Virginia City.  A thoughtful and efficient woman named Janet Jones, who works for the Carson City Convention and Visitors Bureau, set up a special event for me.  She issued a media alert, which brought a Virginia City reporter, Karen Woodmansee (Virginia City News) to interview me, my second press encounter.  (See www.virginiacitynews.com and search for “Centenarian Henry Wasserman.”)  The conductor, Neil, and his crew allowed me to call the “Welcome Aboard” to the passengers.  Being a railroad enthusiast my entire life, I relished the experience.  I received a gift bag and all the attention you can imagine.  The passengers were marvelous!

Last newspaper interview — July 28, 2012.  Reporter Stephanie Sumell from The Acorn (which covers the Conejo Valley) spent her valuable weekend time speaking with me.  Her article is due to be published next week on August 9, 2012.  The SOUL SHERPA website will provide the link for my readers.

I’ll have more to write as we age gracefully, together, surrounded by as much love and support each of us can muster.  None of us should go through this phase of life alone.  I encourage everyone, be they young, middle-aged or older, to help each other as best we can along this path of life.  Trust me.  I’m living proof of the benefits.